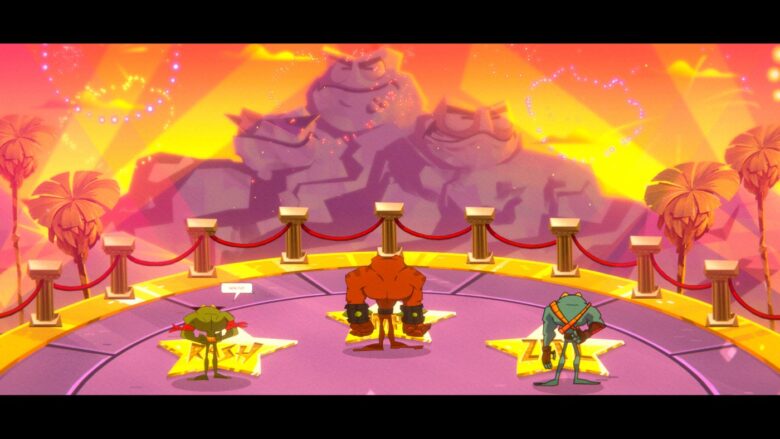 Battletoads (2020) is a three-player cooperative beat ’em up/action game and a reboot of the classic Battletoads series from the 90s. Featuring three radical, buff toads who want to beat the crap out of every bad guy in sight, this new take on the cult-classic franchise is both wacky and challenging. Like every other Battletoads game before it, Battletoads (2020) presents a colorful, humorous, and combat-heavy experience. We’ve seen other retro beat ’em up franchises succeed with modern sequels, such as Streets of Rage 4, but does Battletoads (2020) provide an experience of similar quality? Does Battletoads and its colorful brand of comedy work with modern tastes, or is this a blast from the past that’s better left unsparked? Let’s find out if esteemed and beloved studio RARE and developer Dlala Studios are able to revive the beloved Battletoads from decades past with this modern effort.

The Bright and Boisterous Battletoads

Battletoads (2020) features the three famous, hard-hitting amphibious brawlers known as the Battletoads, including Rash, Pimple, and Zitz. Although things start out looking good for the Battletoads, things come crashing down all too quickly after they realize they’ve been living a virtual life for decades. The Battletoads escape their simulated reality and must quickly accept the fact that they are no longer popular heroes, but forgotten has-beens. Trading in their fisticuffs for middle-management-level jobs, the Battletoads must come to grip with their startlingly brutal reality.

When I say that the narrative and storytelling in Battletoads (2020) is one of the best parts of the experience, I know how silly that sounds. The Battletoads franchise has never had particularly strong world-building or lore, an issue that is called into question more than once during the new game. In fact, Battletoads (2020) is incredibly self-aware and witty, poking fun at both the series itself and the characters within. Through a handful of absolutely ridiculous mini-games and a tone that can only be described as “Saturday morning cartoons but with heavy Adult Swim vibes”, Battletoads (2020) establishes its irreverent atmosphere early on.

While the story will undoubtedly work better for longtime fans of the Battletoads franchise, it’s still quirky and weird enough to entice newcomers. If anything, Battletoads (2020) feels distinct in style, with beautifully animated cutscenes, levels, and gameplay. The story itself is often ridiculous and lacks direction, opting for an “it’s not the destination but the journey” approach. By the time the credits rolled, I didn’t feel like the story in Battletoads (2020) was a masterpiece, but it made me laugh enough times to count. After trying to play off the Battletoads as fierce, intimidating characters for decades, it’s fun to see them in a bit sillier light.

The fighting system in Battletoads (2020) is exceptional, with plenty of combos, special moves, and a surprising amount of depth. Although the controls are the same across the board, all three Battletoads feel distinct in both gameplay and style. For example, Zits is moves and attacks faster than the others but his damage is sub-par. Pimple is the tank of the group, moving slow but smashing through enemies like a truck. Rash represents the balance between the two and is able to sustain damage and deal it in equal measure. If you’re playing three-player cooperative (which is only available locally, since there’s no online play), each player must pick a Battletoad and stick with them. However, solo players can swap between all three Battletoads at any time, with downed characters reviving after a small cooldown period.

Even when compared to other modern beat ’em ups like the previously mentioned Streets of Rage 4, the fighting system in Battletoads (2020) is pretty impressive. Each character has a quick, heavy, and charge attacks, which can be used to create wicked combos. It’s incredibly easy to pop enemies up in the air and juggle them, then finish them off with a stylish special attack. Enemy encounters are fast, colorful, and visually chaotic, often resulting in gleeful havoc.

As you progress through the game you’ll unlock other abilities, such as a whip-move with your tongue that lets you pull enemies toward you. Despite your arsenal of flashy and super-cool looking attacks, the game can be pretty challenging, so be prepared to get frustrated. However, a bevy of checkpoints ensures that you’ll never lose too much progress and there’s no “game over” or life counter to worry about.

More Than Just A Beating

Somewhere around the halfway point of the game, Battletoads (2020) takes a wild turn and starts swapping genres at a rapid pace. Instead of a side-scrolling beat ’em up, you’ll be playing a space-themed shoot ’em up or a relaxed platforming level. There are often short puzzle-solving sections and effective and funny mini-games scattered throughout the experience as well, which work to varying degrees. Unlike the mini-games however, the platforming and shoot ’em up levels overstay their welcome. If you’re a fan of weird games and different genres like I am, you might not be incredibly annoyed, but beat ’em up purists definitely will.

Like the rest of Battletoads (2020), the non-beat ’em up levels are very colorful and have an impressive amount of depth. That said, most people didn’t purchase Battletoads (2020) thinking they would play a shoot ’em up. When you take into account the game’s significant difficulty curve, a good chunk of these sections can be frustrating. There are even a few racing segments similar to the infamous “turbo tunnel” level from the original Battletoads, which can cause their own headaches. Thanks to the lenient checkpoint system, you should be able to overcome these stages eventually with practice, but that’s not really the issue.

Considering that Battletoads (2020) is roughly a 4-hour game (give or take a few hours depending on your chosen difficulty level and skill), a good chunk of that time is non-beat ’em up gameplay. While I appreciate the developers taking some risks and offering a variety of gameplay genres, I appreciate good beat ’em up content more. To be brutally honest, it doesn’t matter how well-designed your platforming and shoot ’em up levels are, it’s not what I want out of Battletoads. It’s like making a new Super Mario game, except 40% of it is a first-person shooter. It might be cool, but it’s not what players buy Super Mario for.

There are a lot of great things about Battletoads (2020). The combat is satisfying, the art style is unique and colorful, and the story made me laugh pretty hard. It also takes some big risks, many of which pay off, including the humorous mini-games and distinctively meta humor. There are also plenty of negatives. The lack of online co-op is disappointing, the difficulty curve feels inflated, and a significant portion of the game isn’t even a beat ’em up.

Ultimately, Battletoads (2020) is a mixed bag that I recommend you try, but that recommendation comes with some exceptions. If you’re a Battletoads purist who wants this to be a supremely faithful reboot that continues the classic story (or lack thereof), you’ll probably be disappointed. In fact, I can see many fans of the original games disliking this new game completely due to its mid-game genre shifts. Although I had an absolutely great time smashing through baddies and experiencing the colorful and quirky world of this new Battletoads game, I feel like it could’ve been much better with a bit of focus. If there is a Battletoads 2 in the works, I’m excited to play it, but I hope its feet are firmly planted in the beat ’em up genre.

Note: This game was reviewed on Xbox One using a final retail copy.

59
shares
FacebookTwitter
Tags: Dlala Studios, twinstick shooter
Summary
Battletoads is a game of ups and downs. The beat 'em up action is great and will definitely get fans of the series riled up, but the genre-shifting middle act might put them off. It's a colorful, hilarious, and super-energetic rollercoaster of throwback gaming that works to mixed success. Despite the missteps, Battletoads feels true to its roots with irreverent comedy and wild action, complete with a bonkers story and characters. It's rarely serious, often challenging, and tons of fun to play with a couple of friends. That said, if you're a retro Battletoads fan who is looking to relive their childhood, you might be a bit disappointed. Either way, Battletoads is a brief but exciting adventure that manages to resurrect a mostly-dead franchise in some fun ways.
Good
Bad
8
Great