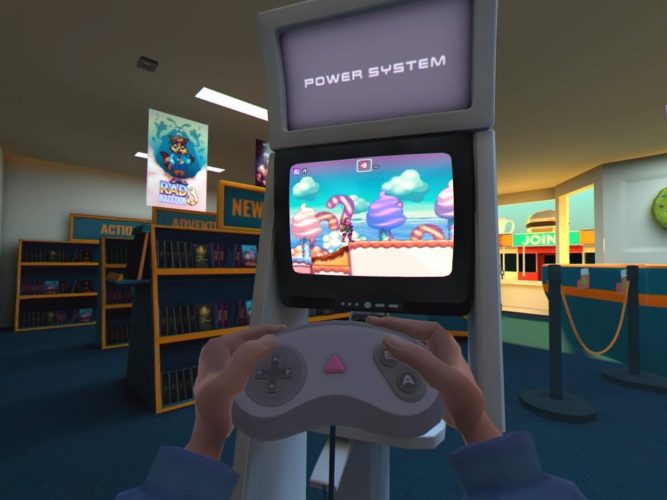 Pixel Ripped 1995 puts players directly into the pixelated world of videogames, placing them in the shoes of the powersuit-wearing heroine named Dot. Living in a peaceful 16-bit village along with her neighbors, Dot enjoys a simple life of watching television and hanging out on the couch. One day, Dot’s village is attacked, corrupted by the returning goblin villain known as the Cyblin Lord. This time around, the Cyblin Lord’s powers are strengthened by a powerful artifact, giving him the ability to harness the energy of more advanced gaming worlds. In order to prevent the Cyblin Lord from completely glitching out her homeworld, Dot syncs her virtual self with humanity’s best video game player, a young boy named David who lives in the suburbs with his parents.

The narrative in Pixel Ripped 1995 is similar in structure to Pixel Ripped 1989, blending both the virtual and “real” world together to create a doubly nostalgic experience. In addition to existing within the blocky, pixelated world of retro gaming, you’ll step into the shoes of David, reliving the standard childhood of a kid growing up in the 90s. The characters are bright and goofy, the tone is lighthearted and fun, and the whole thing bleeds nostalgia. As a child of the 90s, there’s an undeniable accuracy to the atmosphere that Pixel Ripped 1995 manages to produce. While the actual plot isn’t terribly surprising or compelling, the narrative is still a great homage to other classic games and an excellent recreation of the essence of childhood.

A Trip Through Childhood

Playing Pixel Ripped 1995 is an interesting and ever-changing affair, and one that often involves multi-tasking with a handful of different game mechanics. In the very simplest of terms, it’s mostly a game-within-a-game. Looking through the eyes of David, you’ll play through a handful of short retro games in several throwback environments. Your objective in each game is usually straightforward, such as reaching the end of the stage or defeating a boss. In one level, you play a retro platformer while sitting in bed at night, quickly turning off the television when your mother checks in on you.

In another level, you’ll compete in a tournament at the local arcade, battling against your rival and some other local kids in a beat ’em up game. There are six levels in all, with each one offering a slightly different retro experience. The games you play are often action-based platformers, with a sprinkling of other genres. I especially appreciated the inclusion of a beat ’em up game, but just a bit more variety would’ve gone a long way. Some games are pretty obvious homages to other retro titles, riffing on games like Castlevania, Streets of Rage, and Mortal Kombat. Although the retro gameplay is pretty simple, consistently cool game mechanics and the unique settings you experience heightens the overall gameplay package.

Should You Play Pixel Ripped 1995?

Pixel Ripped 1995 is at its best when it combines the world of retro gaming with the nostalgia of carefree childhood, offering explosive fun in imaginative scenarios. It’s a brief game and should only take you a few hours to complete, so don’t expect a ton of replayability out of the experience. That said, Pixel Ripped 1995 is a worthy sequel that delivers some really awesome gameplay, capitalizing on the novelty of virtual reality in plenty of noteworthy ways.

If you grew up in the 90s, Pixel Ripped 1995 will surely shake you to the core with nostalgia, acting as a joyful adventure through the 16-bit era of classic games. It’s a great game for new VR owners, as it highlights some of the more interesting interactions and gameplay that virtual reality provides. There might not be a ton of content, but the indie-tier price more than makes up for the lack of replayability. Whether you’re looking for a fun game to break in your VR headset and show to your friends, or you’re looking to recapture the feeling of childhood for a brief moment, Pixel Ripped 1995 fits the bill nicely.

Note: This game was reviewed using a final version review code provided by the publisher.

24
shares
FacebookTwitter
Tags: PSVR, retro, virtual reality
Summary
Pixel Ripped 1995 is a brief but very enjoyable trip through the golden age of retro gaming, combing pixelated visuals with an endearing journey through childhood. There's a decent variety in gameplay and some exceptionally cool boss fights, providing a consistently entertaining experience. There's not a ton of replayability to be had, but at a $20 price point, Pixel Ripped 1995 is a decent deal. If you grew up in the 90s or have love for retro games, you should definitely check this one out.
Good
Bad
8
Great