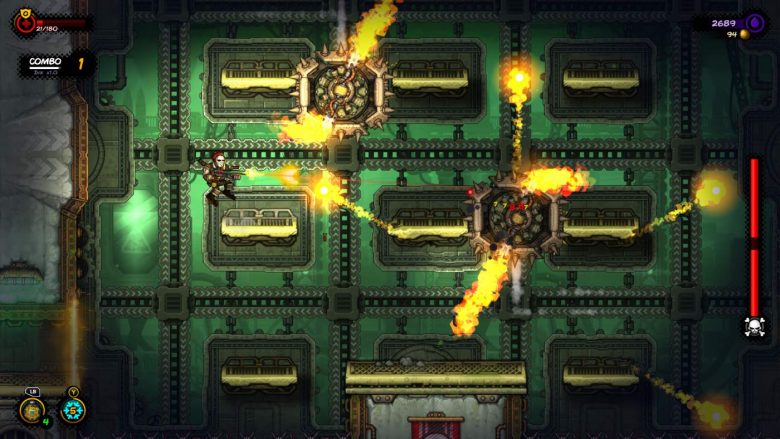 Fury Unleashed is a 2D action-platformer with roguelite elements, developed by Awesome Games Studio. Available on most gaming platforms including Switch, Xbox, PS4, and Steam, this fast-paced indie game offers some intense fun for a budget price. Playing as Fury, the main character of a long-running fictional comic book series, you’ll blast and smash your way through numerous procedurally generated pages of animated mayhem. With each death comes the opportunity to upgrade your character and improve them for the next run. The straightforward objectives and addictive combat make Fury Unleashed an interesting game upfront, but does it remain entertaining throughout the entire adventure? Let’s see if Fury Unleashed jumps off the page with action, or is better left in the bargain bin.

In Fury Unleashed, you play as the titular hero Fury as he hops from page to page in his comic book world. As the story progresses you can unlock other characters and customize your look, but this story is very much a Fury-focused tale. You can choose to take on the adventure alone or with a friend, thanks to the inclusion of local multiplayer. Since the game is a roguelite, the story is delivered in small doses once you finish a new page in one of the three comic books for the first time. Apart from the various conflicts that Fury finds himself fighting in, there’s an overarching meta-story about the writer of the comics that you are playing through.

As Fury shoots and slashes his way across panels of aliens, militia, and other assorted baddies, the author reflects on the dwindling success of the once-popular comic. This narrative content is delivered between levels and often gleaned from the author’s phone screen as it sits on top of the page you navigate. Not only is the meta-storytelling a cool and unique twist, but the comic book setting is used well.

That said, there’s nothing particularly riveting about the narrative in Fury Unleashed. While the meta-storytelling is cool in practice, the actual story content is pretty predictable. Furthermore, each of the three unique comics fail to utilize their unique settings in terms of story. Although Fury blasts his way through a decent assortment of baddies in visually unique locales, there’s not much story motivation to speak of. Apart from expected tropes like “saving the human race”, Fury’s main motivation is to simply be as deadly as possible. This makes for an exciting gameplay experience, but unless you’re really intrigued by the comic book aspect, the narrative offerings in Fury Unleashed will likely fall a bit flat.

Gameplay in Fury Unleashed is fast and frenetic, providing a challenge for even the most seasoned of veteran players. That said, the game includes an Easy mode for players looking for less challenge, so don’t worry too much about the toughness. As you work your way across the procedurally generated panels of comic books, you’ll fend off foes with firearms, melee weapons, grenades, and more. Enemies also possess both melee and ranged attacks, so you’ll have to watch your spacing as you attempt to dodge other environmental hazards. There’s also a dedicated dash/run button, allowing you to swiftly move through each level.

That boost of speed is essential, as Fury Unleashed highlights its kill-combo mechanic as an identifying feature that sets the game apart from other side-scrolling roguelites. After you splatter a bug with your pistols or send a skeleton back to its grave with your sword, you’ll start up a combo. Each additional enemy you kill raises your combo counter, rewarding you with more currency and loot. However, if you fail to kill an enemy fast enough or suffer too much damage during your rampage, you’ll lose the combo entirely. It’s a fun mechanic that helps you focus on avoiding damage and practice your maneuverability, all while racking up high scores that simply make you feel good.

There are over 30 unique bosses to fight, offering high-quality loot when defeated. Although a good chunk of bosses are simply modified versions of each other, there’s still a decent variety in design. You’ll battle acid-spitting spiders, chained shamans, giant tanks, and more. Weapons of varying rarity can be looted from crates and new weapons can be unlocked through various in-game challenges. Generally speaking, there’s a lot of ancillary content you can engage in during levels to help bolster your inventory and strength, but you can choose to forego these bonuses in an attempt to reach the level exit as quickly as possible. It’s a risk/reward system that encourages you to explore levels continuously, but also provides the possibility of extremely satisfying speedruns.

As you would expect from an action-based roguelite, Fury Unleashed offers an expansive skill tree full of upgrades and new abilities for you to unlock. After dying during a battle (and you’ll die pretty often), you’ll be sent back to the menu to upgrade Fury using the ink currency you’ve earned. There are over 25 skills to increase, giving Fury more health, a longer combo time, higher critical hits, and a variety of other offensive and defensive moves. While most of the skills are simply passive upgrades that increase your existing stats, there are a few upgrades that add in new abilities and attacks.

The skill-tree in Fury Unleashed doesn’t reward you with any game-breaking abilities and that’s for the better. The small advantages you earn after each character-upgrade might not be immediately noticeable, but after investing a significant amount of ink into Fury, you’ll feel like a far more badass warrior. Levels that at first felt brutally tough slowly become manageable, There’s also enough variety in upgrades to afford a level of strategy, so your preferred play-style might be far different from another player’s. Simply put, upgrading your character in Fury Unleashed is a rewarding loop of progress that makes it easy to jump back into the action.

Should You Play Fury Unleashed?

There’s no shortage of roguelite games nowadays and more release every week. It can be hard to stay current with the best-of-the-best, and while Fury Unleashed might not be as compelling as a game like The Binding of Isaac or Rogue Legacy, it’s still surprisingly fun and consistently replayable. The high level of difficulty and quick-paced action might scare off some players, but those who appreciate a rewarding challenge will latch on quick.

The vivid comic book art style, meta-storytelling, and interesting combo system makes Fury Unleashed an enjoyable indie title. On the recommended difficulty, I was able to finish the game in about 5 hours, so it’s a bit on the shorter side. At the low-tier price of $20 at release, there’s more than enough content to justify the purchase, assuming you haven’t grown tired of procedurally generated levels or the general concept of roguelites.

Note: This game was reviewed using a final version review code provided by the publisher.

0
shares
FacebookTwitter
Tags: action, comics, roguelite
Summary
If you ever wanted to test your mettle as an comic action-hero, Fury Unleashed presents a pretty good opportunity. Thanks to its low price, replayability, and generally cool vibe, Fury Unleashed is a mostly satisfying roguelite. The game ends just as it hits its stride, but that doesn't stop the preceding hours from being plenty of fun. Whether you're playing solo or locally with a friend, Fury Unleashed is an entertaining indie roguelite that packs a punch.
Good
Bad
7.5
Good