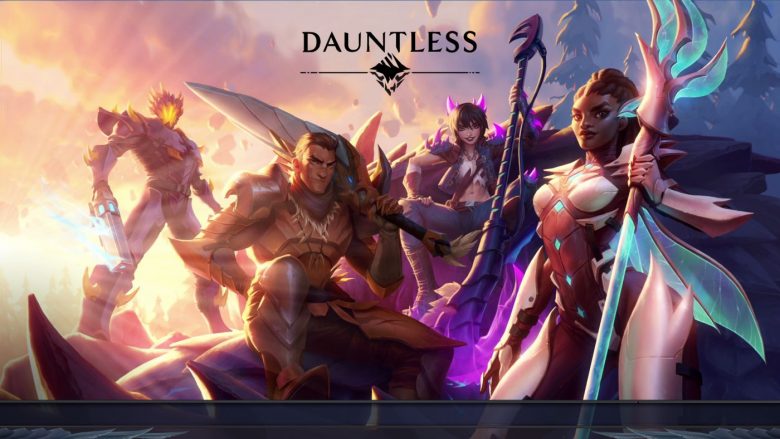 A piercing howl interrupts the din of a serene snowfall. A massive glowing beaver trundles through the freshly fallen snow with a swagger of a creature who isn’t used to taking any shit from anyone. A few moments away, 4 practiced hunters wearing what looks to be a mishmash of discarded Halloween costumes from a neglected consignment store spin weapons from sheathes with the practiced maneuverings of trained killers. Little does the big-ass beaver know, his flesh and body, too, will be harvested for the making of these silly costumes and deadly objects of the hunt. Such is the circle of life in the new F2P game Dauntless.

Dauntless is a title from Phoenix Labs in which the player embarks upon hunts to kill massive hybrid monsters and harvest their parts to create better, more killy things. That’s really the most concise summary that can be mustered. If it sounds a lot like beloved Capcom smash hit Monster Hunter World (paid link), that’s because it basically is a more simple (and free) iteration of the same concept. This isn’t such a bad thing, as one of the biggest complaints about the Monster Hunter franchise is the high barrier of entry for new players.

Dauntless tackles this issue with ease, introducing fledgling hunters to the wild world by way of introductory quests that encourage the user to try out the roster of weapons and try to find a play style that suits them. Whether by sword, axe, hammer, war pike, dual blades or repeaters, your business is killin’ monsters, and business is booming.

The quests persist, but not in a way that makes the core play-loop repetitive or boring. In fact, the monster fights boast some of the most creative mechanics and sheer jaw-dropping spectacles (looking at you Valomyr) that Monster Hunter tends to avoid to maintain their air of semi-seriousness. It also seems, for better or worse, that the fights in Dauntless don’t lean so heavily on mechanics so as to make the fights seem overly scripted.

For those familiar with Epic Games’ smash hit Fortnite Battle Royale, the art style and voices may seem familiar. It appears that Dauntless draws heavily on Fortnite for inspiration. This doesn’t take away from the fun to be had in the often relaxing arcade style hunting patrols that you embark on in Dauntless.

Of course this comparison to Fortnite BR wouldn’t be complete without mentioning the inevitable Battle Pass that Epic is relatively well known for. Luckily for new hunters in Dauntless, there’s a great intro bundle available for $4.99 USD that gives you enough premium currency to purchase this pass. You can effectively leverage that pass into more gear, transformations, and currency to keep the cycle going.

As far as gameplay goes, Dauntless is far from perfect. There are a number of fights and animations that provoke terrible frame rate drops, as well as buggy interaction scripts that really ruin immersion and can create tactical blunders. Pair these issues with a lack of inspiring or cohesive narrative outside of the ignorable quest text, and you’ve got a rather dull first act. However, it’s good to remember that the game is still young, and seeing the meteoric rise of other games on the Epic Store, I have faith that in time not only will these issues be resolved, but Dauntless may be yet another prolific free-to-play hit.

While it may not be the smash hit/cultural phenomenon that Fortnite Battle Royale is yet, (I mean, come on! It was name dropped in Avengers: Endgame!) Dauntless just needs a bit of polish to give this game some sticking power. It may not be long before you see people of all ages doing the dances from Dauntless at any given opportunity.

Can’t get enough giant monster slaying? Grab a copy of Monster Hunter World or get some currency so you can grab that Dauntless Battle Pass! (Paid Links)