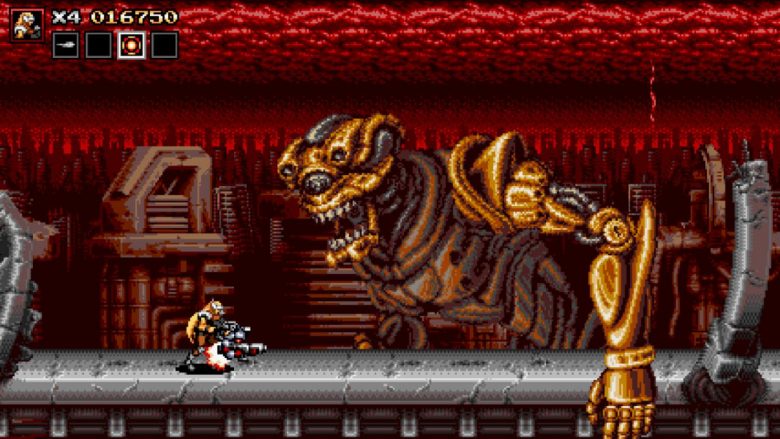 Every now and then, a game like Blazing Chrome pops into my play rotation and surprises the hell out of me. Developed by passionate indie studio JoyMasher and published by retro collective The Arcade Crew, Blazing Chrome calls back to the extreme “attitude” of the 1990s run ‘n gun genre. If you’ve played games like Metal Slug, Contra, or the more extreme Mega Man games, Blazing Chrome is a lot like that. If you’ve never had the pleasure of playing a run ‘n gun game from generations gone, it’s basically a playable version of your standard action blockbuster. Giant explosions, huge boss fights, and tons of rad attitude are all represented in beautiful nostalgia-drenched pixel art. It’s a very promising premise for those of us who have a heart for the Super Nintendo and Sega Genesis era, but does Blazing Chrome succeed beyond that?

Like most games from the genre, Blazing Chrome has a very straightforward narrative that ultimately serves as a vehicle for explosive sequences of action. Taking place in the hazy time frame of 21XX AD, the world has been overrun by a evil robotic force. The land has been laid to waste by industry, with more and more metal permeating the world. You play as a small group of rebellious heroes, including a punky female soldier named Mavra, a looming robot named Doyle, and a few other fun unlockable characters. As the human race begins to suffocate under the weight of their new robotic superiors, Mavra and company set out to destroy the merciless machines.

After you pick your character and difficulty setting, you’re able to pick from four missions on an overworld screen. Since the storytelling is light and loose, players can tackle the levels in any order they desire. Unlike the Mega Man franchise, you won’t gain any super helpful abilities at the end of a level. However, the freedom to jump between levels out of order is useful, especially as you unlock new game modes that encourage replayability.

Gameplay in Blazing Chrome is very punishing, but simple enough to understand. The objective of each level is always to progress to the end in one piece, defeating hordes of enemies as you move across the sidescrolling landscape. Mini-bosses mark the halfway point in each level, and multi-phased boss fights punctuate them. You’ll rarely want to let go of the “fire” button, as there’s very little in the way of reloading. You can fire your weapons in eight cardinal directions, locking yourself in place for better accuracy.

Most characters start out with the same default assault rifle, but plenty of power-ups can be procured as you progress. Like Contra, you’ll quickly find a gun power-up that you fancy and start seeking it out with intent. Due to its high damage and ability to flatten bosses in mere seconds, I became a fan of the grenade launcher pretty quickly. There’s a nice mixture of explosive, laser beams, and other wacky weapons to keep things entertaining. Once you find a weapon, there’s no ammo counter on it either. You can collect up to four weapons and swap between them freely, but dying will cause you to lose all your gear. When it comes to Blazing Chrome, dying is something that will occur quick and often.

A lot of retro throwback games struggle to create a balance of difficulty that is both satisfying and fair. For those who grew up playing the Super Nintendo and other older consoles, we expect retro games to be tough. Luckily, Blazing Chrome manages to create a level of difficulty that feels both achievable yet undeniably tough. In addition to the many powerful weapons, there’s a trio of robot pals that will enhance your attack power, defense, and speed. However, if you’re running without a defense robot, you’ll die in one hit. Both bosses and enemies alike have a tendency to throw out random attacks and bullets, making death a quick and consistent occasion.

That said, Blazing Chrome offsets the inherently challenging gameplay with three different levels of difficulty. Easy, Normal, and Hardcore mode all present their own restrictions, including the number of lives you get per continue, how many continues you get, and so on. I found Easy mode to be an excellent introduction to the game, offering a great level of challenge without ever becoming too frustrating. If you want to become a skilled Blazing Chrome player, a lot of it is going to come down to your reaction time, pattern recognition, and ability to stay cool-headed. It’s the kind of arcade-like challenge that is rare to see; where even subsequent deaths are met with the press of the continue button.

The Beautiful Ruins of Pixels

Although the gameplay and level variety are high points in Blazing Chrome, the real star of the show is the art design. I’m a pretty big sucker for pixel art, but there’s still a level of quality that needs to be met before I’ll blindly accept it as good. Blazing Chrome managed to impress me time and time again with its visual spectacle, something that’s pretty hard to do while staying within the bounds of a retro art style. Bosses are well-designed and objectively cool, often acting as homages to other great boss fights of the era. From Super Metroid to Mega Man, I was happy to be reminded of my favorite gaming franchise both in look and feel.

Blazing Chrome also plays with perspective occasionally, as it’s never satisfied with a simple side-scrolling level. There are a handful of vehicle-based sections (including a Battletoads-like obstacle course), and even some 3D third-person rail-shooting segments that call back to classic arcade games like Space Harrier. As you fly through this wild series of gaming homages, flipping between perspectives and visual styles, it’s quite easy to get caught up in the visual flair. Through and through, Blazing Chrome is a hectic game with visuals to match, but one with a distinct retro beauty among the chaos.

It’s interesting then, that one of the only major downsides to Blazing Chrome are the instances of intense lag when too much occurs on-screen at once. Originally, I thought the slowdown was a silly way to call back to those ultra-slow boss fights of the SNES, when the consoles could barely handle the visual chaos. As these instances of lag and slowdown became more prevalent, I began to think otherwise. Whether intentional or not, Blazing Chrome can get exceptionally slow at times, which is a definite detractor from the otherwise thrilling gameplay. While not enough to ruin any specific portion of the game, this lag was noticeable enough for me to take issue with it.

Should You Play Blazing Chrome?

I had an excellent time playing through Blazing Chrome in local co-op, and after unlocking new characters and modes, I was more than excited to jump right back in. If you have fond memories of the Contra franchise or dumping quarters into your local arcade’s Metal Slug machine, you’ll definitely enjoy what Blazing Chrome has to offer. Although the story and characters aren’t as memorable as they could be, the abundance of action and visual spectacle more than makes up for it. Blazing Chrome may not have the same heart-warming effect for younger players as it does for us 80s and 90s kids, but it’s still loads of fun.

If you’re looking for a quick blast of action that won’t require too much thought (but quite a bit of dexterity), Blazing Chrome should be the next game you boot up. Where other throwback games try to emulate the run ‘n gun genre, Blazing Chrome captures its essence with ease. There’s a fun-factor to Blazing Chrome that’s simply not as present in the industry as it was in the era of the Super Nintendo and Sega Genesis. As more and more games struggle to be incredibly realistic with immense online capabilities and money-sucking live services, Blazing Chrome sits defiantly as a sign that the soul of the arcade is still alive and well.

62
shares
FacebookTwitter
Tags: Blazing Chrome, joymasher
Summary
Blazing Chrome brings you back to a time when games were much more colorful, vibrant, and had a specifically charming amount of attitude. Both challenging and satisfying, this run 'n gun title is best played in couch coop with a pal. Unlockable modes and new characters provide the short experience with some much needed replayability, while higher difficulty levels bring a profound level of intensity. While a few technical issues can cause occasional frustrations, this is a nostalgia-filled roller coaster of exciting retro action.
Good
Bad
8.5
Great