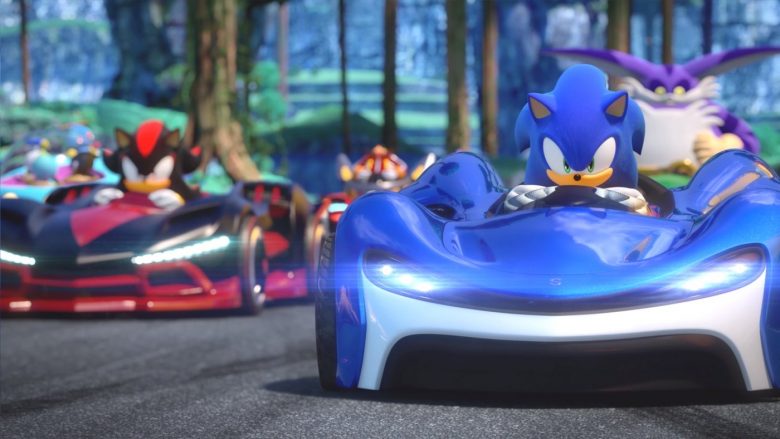 Team Sonic Racing promises high-speed kart racing with your favorite Sonic the Hedgehog franchise characters. Seeing as how “going fast” has always been a priority in the Sonic universe, a ridiculously speedy racing competition seems like a logical step. Besides the colorful visuals and appropriate Sonic brand stages and characters, does Team Sonic Racing bring anything new to the kart racer genre? Let’s find out if the blue blur has what it takes to hang with the likes of Mario Kart.

If you’ve ever played Mario Kart or any other kart racing game, you’ll have a decent idea of what to expect with Team Sonic Racing. Sonic, Tails, Knuckles, and other characters from the franchise all join together for some zany racing action. You’ll speed around various courses based on memorable locations from past Sonic the Hedgehog games, collecting power-ups and weapons to aid you in the race. You can drift over boost pads, collect precious rings on the raceway, and do some cool flips in mid-air. Team Sonic Racing introduces some neat mechanics that work around team cooperation, but beyond that, the core racing mechanics aren’t very inventive or new. That said, it’s still plenty of fun, if a bit lacking in unique style.

It wouldn’t be a Sonic game without going fast, and even in comparison to other racing games, Team Sonic Racing is exceptionally fast. There’s rarely a moment where you’ll be slowing down, and tracks are all designed to encourage long drift strings and excessive boosts. In fact, there is barely any conventional braking, as the left trigger is mainly used for maintaining drifts. Even if you get hit by a missile or fail an air trick and fall off the course, it won’t be long before you’re back to top speed. This constant urge to reach maximum speed adds a real urgency to races, and laps seem to fly by in a flurry of boosts and blasts. Better yet, Team Sonic Racing never buckles under the intense speed of the action, resulting in a smooth experience in both solo and split-screen play.

The focal mode of the game, Team Adventure, is where you’ll spend most of your time racing. It’s a story mode that combines all assortment of race types and ties it all together with a classic world-progression map. The story is very straightforward and mostly told through pre-race dialogue. Invited to a racing competition by the myserious Dodon Pa, Sonic and his friends hop into high-tech vehicles and enter the contest. Players can take on this extensive adventure either solo or with friends, making it a completely cooperative game as well. You’ll start in chapter one, working your way through the single races, grand prix events, survival races, and more. Each event has star rankings that can be earned by completing certain objectives, like coming in first place or collecting a certain number of rings.

Team Adventure is also where you’ll come to learn the biggest changes that Team Sonic Racing has from other games in the genre. The focus of Team Adventure is right in the title; team play. Instead of racing against every other opponent for individual gain, you’ll work as a part of a team of three, all helping each other reach a higher position. For example, you can trail behind a teammate, absorbing their slipstream for a quick boost. You can pass off unwanted items your teammates, and request items in times of need. Additionally, once you build up your ultimate meter, you can unleash a Team Ultimate move, which gives your squad a tremendous speed boat and the ability to smash through opponents. A few of the events in Team Adventure will have you racing solo, but for the most part, it’s a team-based affair.

As fun as cooperative play can be, there’s nothing like a good race between friends. Team Sonic Racing allows you to engage in both online and local multiplayer races, ensuring both sides of the competitive coin are covered. The online matchmaking is solid, and there are tons of options for local play as well. Team Sonic Racing also feels good to play online, with minimal lag or disconnected sessions.

Online multiplayer provides a nice host of options, including matchmaking and custom lobbies. You can choose between Quick Play, Team Races, and Standard. Team Races and Standard playlists offer both casual and ranked competition, which helps separate the casual players from the more competitive breed. When you hop into a casual online lobby, you will all vote on the course between four choices. The choices offer a variety of race-type as well, so each match should feel unique.

There are over 20 different tracks and six race-types that can played as either standard or team races, so there is plenty of variety to keep things fresh. Ranked play is more straightforward; standard rules on a handful of courses. There is a certain intensity to ranked matches that I enjoyed, but I found that casual playlists offer more variety and entertainment.

No kart racer would be complete without some vehicle customization, and Team Sonic Racing has a decent amount to dig into. In the Garage menu, you can apply various cosmetic and performance parts to each character’s vehicle, tuning them to your liking. Most performance parts simply switch a bit of the stats, increasing one at the cost of another. In this way, you won’t really be able to upgrade your vehicle in the conventional way, but simply tune it closer to your liking.

That said, there are a decent selection of cosmetic options as well. You can apply new decals, change paint schemes, and generally add your own spin to the design. Both cosmetic items and performance parts are earned via “mod-pods”, which are essentially one-item loot crates. You can buy mod-pods for 10 in-game credits, which are earned through normal gameplay. It might take you a while to win items for the character you play as, which makes the loot crate mechanic seem a bit unnecessary.

Should You Play Team Sonic Racing?

On the surface, Team Sonic Racing is a standard display of kart-racing mechanics with some nice visuals and beloved Sonic the Hedgehog characters. Once you dig a bit deeper though, you’ll find some inventive team-based mechanics that help separate the game from its competitors. The main story can be played either solo or with friends, local multiplayer keeps parties exciting, and the online multiplayer is surprisingly strong on a technical and entertainment level. The kart customization options are nice, but weighed down by the odd loot crate mechanic.

There are a dozen or so characters to choose from, more than 20 different stages, and various race-types to enjoy. There’s enough content in Team Sonic Racing to keep you returning for more, whether it be the star challenges in Team Adventure or attempting to climb the leaderboards in ranked online play. There’s definitely some nuance to the driving mechanics, but any kart-racing fan should have no trouble learning the ropes. All told, Team Sonic Racing is an enjoyable alternative for kart-racing fans looking for something other than a Mario Kart title. The graphics are colorful and vibrant, the controls feel good, and there’s definitely an intense amount of speed. Team Sonic Racing checks all the boxes for a quality kart racer, and there’s only a few flaws that slow down the experience. While it’s not a perfect package, Team Sonic Racing provides enough fun to warrant the purchase, provided you’re a fan of the kart-racing genre in the first place.

Interested in buying Team Sonic Racing? You can support our website by purchasing it through Amazon by using the link below! (Paid Link)

0
shares
FacebookTwitter
Tags: sega, sumo digital, team sonic racing
Summary
On the surface, Team Sonic Racing is a standard display of kart-racing mechanics with some nice visuals and beloved Sonic the Hedgehog characters. Once you dig a bit deeper though, you'll find some inventive team-based mechanics that help separate the game from its competitors. The main story can be played either solo or with friends, local multiplayer keeps parties exciting, and the online multiplayer is surprisingly strong on a technical and entertainment level.
Good
Bad
8
Great