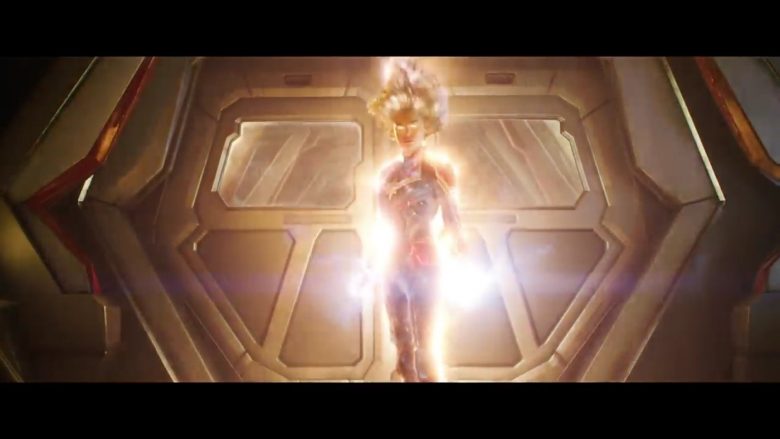 Captain Marvel is yet another superhero origin story set within the Marvel Cinematic Universe. Releasing just a month before the massively anticipated Avengers: Endgame, Captain Marvel tells us the story of one of the most powerful superheroes to ever grace the pages of comics. The story also serves as a sort of prequel, as it takes place in the mid-1990’s. There’s a combination of new characters and old fan favorites, and the movie also delivers a bit of backstory to expand the lore of the MCU. In many ways, Captain Marvel is the MCU equivalent of DC’s Wonder Woman. Besides having a relatively powerful female lead, does Captain Marvel do anything new and exciting in the genre of superhero films?

The main plot of Captain Marvel focuses on the titular character herself. The movie begins by introducing us to Vers (Brie Larson), a fierce alien warrior living on the planet Hala. Vers is a Kree, a species of alien that have appeared in the MCU before. Alongside Kree leader Yon-Rogg (Jude Law), Vers struggles with strange dreams and a cliché bout of amnesia. Locked in a war with a race of green shapeshifting aliens known as the Skrull (foes we have met in prior MCU movies), Vers embarks on a rescue mission to retrieve one of her comrades.

This rescue mission takes a predictable turn for the worse, and results in Vers crash-landing on Earth. With the shape shifting Skrull in hot pursuit, Vers must adapt to Earth’s society, reconnect with her team, and work side-by-side with Earth’s most elite line of defense; the Agents of SHIELD. Vers finds a trustworthy partner in SHIELD agent Nick Fury (Samuel L. Jackson), who helps her acclimate to her new surroundings. With all the players in line and the stage set, Vers and her new allies set out to resolve the conflict and uncover her past.

I won’t bury the lead any further; Captain Marvel was surprisingly underwhelming. It’s been over 10 years since the start of the Marvel Cinematic Universe, and the superhero genre has matured quite a bit in that time. It’s baffling then, that despite the continuous quality of the MCU’s storytelling, Captain Marvel struggles to find a worthy plot. Our introduction to Vers and the rest of the Kree is awkwardly brief, and this lack of character growth is a consistent issue.

In many ways, Captain Marvel expects us to immediately fall in love with its characters, but it doesn’t give us a reason to. Vers is a decent protagonist, but we barely get ten minutes of character building before the action kicks in. She’s introduced as a fierce warrior who struggles to maintain her emotions, which is funny considering just how emotionless she is as a character. Intentional or not, Vers strikes an awkward balance between a stoic hero and a wooden board. The same can be said for the mass majority of the ensemble, with the exception of a few notable performances. Nick Fury remains a likable character, and Jude Law does a pretty admirable job in the role of Yon-Rogg. Unfortunately, nearly every other character is forgettable or performed below average. Honestly, the most interesting character is an adorable orange cat named Goose.

It takes a full hour before the movie identifies its villain, but this quickly gets muddied as hamfisted betrayals and plot twist occur. Between Vers’ amnesia, the Kree versus Skrull plot, and the interaction between SHIELD and Vers, Captain Marvel can’t decide which plot is more important. Furthermore, instead of delivering original content and a self-contained story, Captain Marvel often chooses to retread old MCU content. In fact, Captain Marvel seems far more interested in providing unnecessary world-building than an actual story. Vers’ journey to uncover her past and solve the mystery of her amnesia is the backbone for the plot, but it serves as little more than an avenue for callbacks and references. Unlike Ant-Man or Guardians of the Galaxy, Captain Marvel feels less like an origin story and more like an awkward chunk of content that was cut from other films. It gives us some insight on the character of Vers before she pops up in Avengers: End Game, but the movie does little else with the source material.

Despite the numerous failings in the narrative department, Captain Marvel is still a decent time at the theater. Like other Marvel superhero films, Captain Marvel has its fair share of CGI-heavy action scenes. From fist fights to spaceship battles, the movie has plenty of exciting combat scenes. There’s a distinct lack of stakes in the action, but it’s fun to watch nonetheless.

Depending on your sense of humor, you might find Captain Marvel to be quite funny too. The movie managed to garner a few chuckles from me and the audience in my theater, but a good portion of the jokes were dead on arrival. Sometimes it’s the fault of lazy delivery or underwhelming actor performance. Other times, it’s simply because the jokes aren’t that funny. Also, the 90’s era is played up in the soundtrack, which features tracks from bands like Nirvana. Captain Marvel doesn’t beat the 90’s nostalgia over your head, which I appreciated. At times it’s a bit on the nose, but for the most part, I enjoyed the various references and nods to the pop culture from the 90’s.

Should You Watch Captain Marvel?

If you were to rank Captain Marvel against the entire rest of the MCU, it would probably sit somewhere on the bottom half of the list. It’s not the worst film that Marvel has put out, but it’s far from the best. Ultimately, your enjoyment will depend on your affinity for the character, your overall level of fandom for the MCU, and how much you value an interesting narrative. If you’re satisfied with a handful of action scenes and an occasional chuckle, Captain Marvel will be appropriately entertaining. Unfortunately, after ten years of seeing fun action scenes and chuckling, I desire a bit more.

Captain Marvel is a serviceable movie, and a decent popcorn flick. Unfortunately, the awkward pacing, forgettable characters, and unfocused plot really weigh down the experience. Instead of feeling lighthearted and fun, it often comes off as dull. I’m thankful that Marvel has gained another strong female warrior in the form of Vers, but I don’t feel any attachment to the character. For every interesting or fun thing Captain Marvel manages to produce, it also gives us an equally unnecessary or ridiculous plot point. It’s a good thing that Marvel released this one a month before Avengers: End Game, because that’s about how long I’ll remember the contents of the story. Even as the credits were rolling, I found myself struggling to recall character names and plot points. Hopefully, Avengers: End Game will give Vers some room to shine, because her origin story was significantly underwhelming.