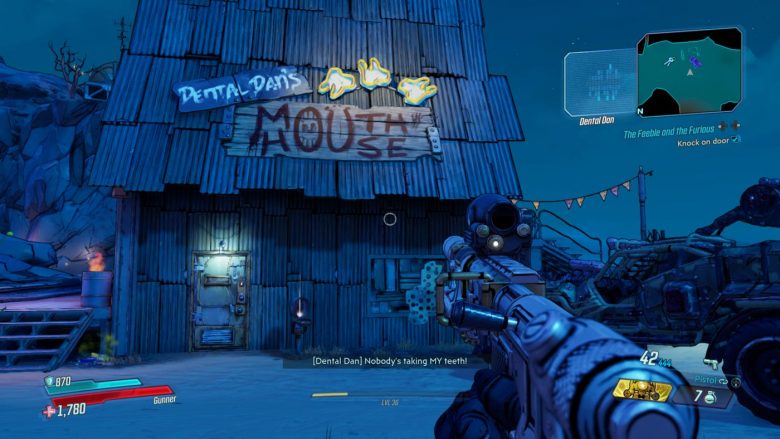 Borderlands 3 is weird. That’s on-brand though, since Borderlands has always been irreverent and exceptionally dark with its humor. Who can forget the tale of Face McShooty, star of one of the best Borderlands side quests of all-time? Face McShooty, whose only request was that you shot him right in the face. Ah yes, Borderlands, the most refined comedy in gaming. Borderlands 3 continues this trend of absolutely ridiculous side quests, and after spending dozens of hours spraying lead, we’ve crafted a list of our favorites. From social commentary to meta-gaming, we’ve done our best to pick out the funniest side quests in Borderlands 3. If you’re searching for the weirdest, dumbest, or otherwise most ridiculous side content that Borderlands 3 has to offer, look no further!

Note: This list contains spoilers for Borderlands 3. Certain locations and plot points will be spoiled.

In Lectra City on Promethea, you can find a man trapped in an AI-enabled porta-potty. Since the AI won’t let him leave without handing over his illegal firearm, you are sent to destroy a corrupt “Cop-bot” and replace the existing AI with a more lenient one. An unexpected turn of events sees the porta-potty ejecting itself thousands of feet off the ground, the criminal still inside and screaming for his life.

In the Atlas Headquarters, you’re tasked with eradicating a ratch infestation and start by seeking out the janitor, Terry. After slaughtering a few dozens ratches, you find a ratch with giant ears and a mustache that speaks like a human. This is Glenn, a friend of Terry’s whose consciousness was transferred into the bug-like creature as some sort of last resort. It turns out that Terry the Janitor considered himself a home-grown surgeon, and the ratches you’ve been blasting are his many failed experiments. Unsurprisingly, Terry eventually reaches the same fate, cementing this as one of the weirdest side quests in Borderlands 3.

Rumble in the Jungle

In the Voracious Canopy on Eden-6, you can discover an overrun research outpost that leads you on a search for a missing team of scientists. This oddball side quest sees you befriending a “failurebot”, completing proving trials for a clan of monkey-like “jabbers”, and facing off with a dinosaur-AI hivemind. Rumble in the Jungle is just one of those quests that continues to surprise you with increasingly ridiculous objectives, ultimately resulting in one of the funniest side quests that Borderlands 3 has to offer.

The Feeble and the Furious

In Devil’s Razor on Pandora, a grumpy old Pappy needs a lift while he runs some errands. Being an illustrious vault hunter, there’s no one better for the job than you. Pappy’s chores take you to a handful of locations, including Dental Dan’s Mouth House, where you’ll fight to the death to recover some dentures. Pappy spends most of your adventure talking a ton of smack, ordering you around and dishing out insults at every turn.

Let’s Get it Vaughn

At the Carnivora festival on Pandora, you’ll run into the unintelligible host of the biggest reality show on Pandora. Your comrade Vaughn has a pretty big crush on the host, and encourages you to try your hand as a contestant. This quest sees you competing in a trivia contest, shooting bandits, and playing matchmaker all at the same time. If the animalistic screeching and hollering of psycho bandits is humorous to you, you’ll likely find this to be one of the funniest side quests in Borderlands 3.

On the Eridian homeworld Nekrotafeyo, Claptrap asks you to help him debug an early access game for your ECHO device. After arriving at the first “hotspot” and entering the augmented world of the game, you must escort a t-posing character through a visually glitchy environment. The entire quest pokes fun at the modern micro-transaction heavy games of the modern era, complete with appropriately dull and barely finished gameplay. It’s not the most exciting quest, but that’s kind of the point.

If you haven’t grabbed your copy of Borderlands 3 yet, grab it using the links above! If you already have the game, check out our favorite merch picks! (Paid links)