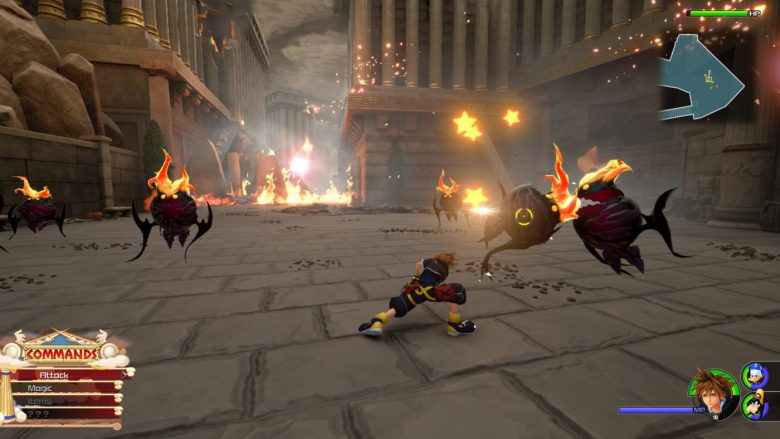 Kingdom Hearts 3 is a game full of anime tropes, ridiculously colorful combat, and most importantly, Disney content. Regardless of who you are, there’s a good chance you’re a fan of some of Disney movies. Kingdom Hearts 3 takes us through a slew of them, and some worlds work better than others. We’ve gone ahead and ranked all the Disney worlds in Kingdom Hearts 3, from worst to best. Ultimately, your preference will depend on your love for the original movies, but this list focuses on other determining factors. Gameplay variety, visual quality, and storytelling are all being taken into consideration. Let’s figure out what the best Disney world in Kingdom Hearts 3 is.

Note: This article will contain moderate spoilers for Kingdom Hearts 3. You don’t have to worry about story spoilers, but this list does cover every single Disney world you’ll see during your journey.

Stumbling into the chilly and ice covered land of Arendelle, Sora, Donald, and Goofy witness a sad woman running up the mountain. This woman is Elsa, the region’s queen. Feeling a duty to help her, they ascend the mountain to investigate. Sora’s quest up the mountain is pretty plain, with a handful of setpiece fights and a maze-like portion similar to the swamp in the Tangled world.

Like the Tangled world, Arendelle mainly retells the events of the movie it is based on. For Arendelle, that film is Frozen. I know it’s popular to hate on Frozen, but I think it’s an alright film. Instead, my gripe with Arendelle has little to do with the Frozen property. Arendelle earns its spot on this list due to its uninspired level design, extremely repetitive nature, and underwhelming visuals.

All told, your journey through Arendelle will see you climbing the same mountain three times in a row. Every time you reach the summit, something ends up knocking you off. This places you close to the start of a linear path, where you’ll slog through the snowy banks and ridges to reach the top again. Besides a few pretty areas, the majority of the level is simply snow and rocks. It all starts to blend together, especially as the repetition grows more frustrating. It doesn’t help that Arendelle is one of the longest worlds, vastly overstaying its welcome. I didn’t mind revisiting the story of the Frozen film, musical numbers and all, but the rest of it felt needlessly long and repetitive.

Olympus is the player’s introduction to many of the game’s combat mechanics. Because of that, it’s a treasure trove of cool sequences and fun gameplay scenarios. The level consists of ruined courtyards and alleys, a perilous climb up a gorgeous cliff side, and a climactic battle in the clouds above. The Disney content is pretty thin; the story focuses on Hercules attempting to stop yet another evil plan by Hades. There are a few fun scenes, but the most memorable moments are the boss battle and destruction of the Olympic city itself.

Although Olympus stands out visually, the pacing feels weird and the story content isn’t very interesting. At this point in the game you don’t have very many upgrades, so combat feels stilted and awkward. It’s a nice place to walk around and take the sights in and serves well as a tutorial mission, but that’s about it.

The Kingdom of Corona takes Sora and his friends on a joyous adventure through the forest, joined by Rapunzel and Flynn Rider from Tangled. In addition to featuring the environments and characters from Tangled, the Kingdom of Corona world also retells the events from the original movie. Trapped in her tower, Rapunzel dreams of visiting the outside world. Led by Sora and Flynn, Rapunzel braves the Heartless-filled forest to attend a nearby festival in town.

The world consists of explorable tree groves, rivers, swamps, and the climactic festival. Truthfully, the level itself lacks interesting design, but the visuals are enjoyable nonetheless. The world is held together by the retelling of the movie’s plot, which sets a nice pace. It’s a more cohesive world than Olympus, but fails to produce the kind of wonder that other worlds deliver. There are a few fun mini-games and side sequences, but the quality animation and clean visuals are what shine in the Kingdom of Corona. Ultimately, it’s a bit forgettable. If you enjoy the Tangled movie, you might place this world higher on your own list.

During their travels, Sora and crew find San Fransokyo. This futuristic metropolitan city is the setting of Big Hero 6, one of the more modern Disney flicks. During a scuffle with the Heartless on a big bridge, Sora bumps into a team of heroes aptly named the Big Hero 6. Comprised of a handful of wacky characters, the Big Hero 6 is a group of science savvy teens with cool supersuits. They are led by Hiro, a young but computer proficient captain who commands the inflatable robot Baymax.

Instead of going through the movie’s events, the San Fransokyo world tells an original story that plays into the overall Kingdom Hearts 3 narrative. The city has been infected with Heartless, as well as a mysterious new enemy made of small cubes. In an effort to aid the Big Hero 6, Sora and his pals take to the streets to investigate. It’s a story that’s pretty simple up front, but flies off the rails towards the end. If you’re a fan of the Kingdom Hearts series and have no issue following the overall plot, this world has some pretty interesting twists. For most, it will be a bit confusing and underwhelming.

The San Fransokyo world is one of Kingdom Hearts 3‘s more interesting stages in terms of design. Instead of being a linear stage with segmented areas, San Fransokyo is one large city map. There’s multiple blocks of skyscrapers, tons of rooftops to explore, and a highway system that you can quickly traverse via rail grinding. You can experience the city both during the day and at night, but the main story mostly takes place during the latter. Unfortunately, there’s not a ton of stuff to see and do in San Fransokyo. There are a few distractions, but a lot of the map feels barren. You’ll run around the map a little during normal progression, but there’s rarely a reason to venture beyond the critical path. It’s a decent level with some cool traversal, but lacks the gameplay variety of better worlds.

About halfway through Sora’s adventure, his quest to gain the power of waking takes him to Monstropolis. Home of Monsters, Inc, this world has the gang moving through a mechanical factory with some memorable monsters. The story takes place after the Monsters, Inc film, but still features main characters Sully, Mike Wazowski, and Boo. In an effort to stop the villainous Randall, the team battles hordes of Heartless and Unversed enemies.

The level design is a fun mixture of tight hallways, hazardous obstacle courses, and high-speed rail segments. Monstropolis is one of the more combat heavy worlds, so you’ll be shooting off plenty of special moves. There’s a nice variety of gameplay, and the story content is straightforward. The tale of Monstropolis is easy enough to follow, and uses the source material in interesting ways. We had a blast scaring mobs of enemies with Sully and crew.

The Toy Box world is the first big dose of Disney nostalgia, pulling players into the Toy Story universe. Woody, Buzz, and other toys are in a state of panic after the arrival of the Heartless. As always, Sora and the gang offer their assistance. The quest to stop the Heartless takes the gang from Andy’s bedroom to a multi-leveled toy store.

The store is three different floors, all easily accessible due to a set of traversable rails in the center of the main floor. You can poke around in the doll section, video game section, playroom, and more. Gameplay variety is also a big focus in Toy Box, with a handful of fun new ways to fight and travel. The biggest change is the Giga suits; giant mechs of varying forms that Sora can pilot. Commanding these bulky but quick titans switches to a first person perspective, which shakes up thing a quite a bit.

Perhaps it’s my bias towards the Toy Story films, but the Toy Box world feels the most exciting and polished. Each section of the store feels unique, with differing enemies and aesthetics. There are a number of side activities and distractions, including a first person shooter mini-game. If there’s any downside to Toy Box world, it’s the story. Instead of retelling any of the plots from the movies, the Toy Box story is wholly original. A lot of Toy Box’s story is tied into the overarching narrative, making it hard to follow at times. I would’ve preferred a classic Toy Story tale, but the level design is good enough to excuse the other issues.

I was very surprised by how much I enjoyed this world, given my limited knowledge of the Pirates of the Caribbean film franchise. I enjoyed it so much so, that it ends up being the best Kingdom Hearts 3 Disney world. Sora, Donald, and Goofy are sailing, when they fall off the end of the world. Landing in Davey Jones’ Locker, they reunite with Jack Sparrow and their other pirate pals. The Caribbean world mainly recounts the events of the third Pirates of the Caribbean film, At World’s End. It’s a fantastic representation of the movie’s main events, skewed slightly to fit into Kingdom Hearts 3‘s narrative.

The Caribbean doesn’t earn its spot on this list due to the story alone, no matter how high quality the visuals are. The world is comprised of several areas, including underwater caves, the open seas, the iconic Port Royal, and more. In fact, the Caribbean world feels very fleshed out; at times it feels like its own fully realized sub-game. There’s an incredible amount of gameplay variety: several unique boss fights, naval combat, free roam exploration, and much more. At one point, Sora receives his own ship, and you’re able to sail around a large area, upgrading it as you find collectibles.

The Caribbean world has it all: a clear and interesting plot, interesting gameplay and boss fights, awesome visuals, and a variety in environments. It’s one of Kingdom Hearts 3‘s more lengthy levels, but unlike Arendelle, it never feels repetitive. The Caribbean world is constantly surprising the player with new ideas and fun set piece moments, and better yet, it all feels great to play. I found myself very invested in the Caribbean, despite having little nostalgia for the movies.